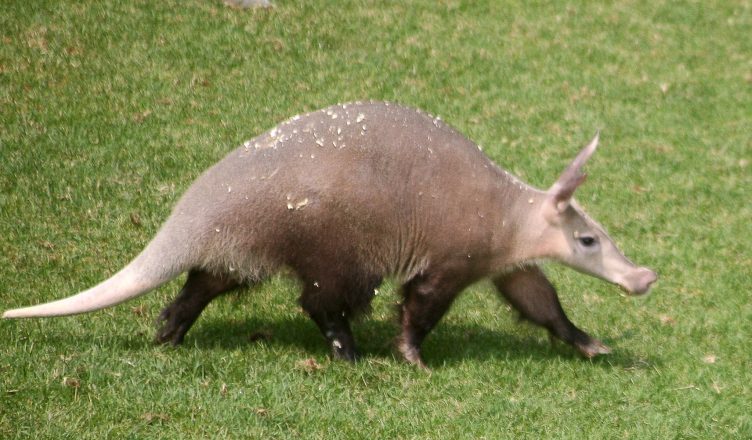 The Aardvark is a unique mammal rarely seen by humans. The scientific name for this uncommon animal is Orycteropus afer. Its long tail is about half the size of its bodies, and they can weight up to 180 lbs. (approximately 81kg). Below are 10 cool facts about this unusual mammal!

10. Aardvarks only live in the African continent

Aardvarks can however, venture around to more forested areas in search of food. As they live in a wide range of area in Africa, they are rarely seen in the wild.

9. Aardvarks are nocturnal and live alone

Because of the extremely high heat in the desert, Aardvarks only come out at night. During the day, this creature sleeps in the holes it dug to escape predators and the intense desert heat. They curl up into a ball like an anteater to sleep.

Aardvarks have night vision, but they are color-blind and have generally cannot see very well. They rely mainly on their sense of hearing and smell as they move about in the dark. These hungry mammals can travel up to 30km (19 miles) to seek out food. They also usually live alone, only seeking out other aardvarks during mating season.

This had led to difficulties in documenting their behavior and movement, but they are not considered an endangered species.

8. Aardvarks look like a pig, rabbit and kangaroo at the same time

Aardvarks have a very peculiar look. They resemble various animals merge together. Many describe them as having a pig’s snout, kangaroo’s tail and face, and rabbit ears. They also have thick skin to help them withstand insect bites and stings when they are feeding.

Despite their eating habits, they are not closely related to the anteater. They are actually more related to the elephant than other animal. The name ‘aardvark’ literally means Earth Pig in South African.

7. Aardvarks feasts on termites and ants

The aardvark’s favorite food are termites and ants. Using their powerful shovel-like claws, they can easily break through ant and termite mounts. Their viscous tongues, which can stretch up to 30 cm (almost 12 inches), are used to lick up the insects. Up to 50 thousand bugs can be eaten in a single sitting.

To allow the bugs to regrow their population, the aardvark moves in a zig-zag fashion when moving around and searching for nests on foot. They also avoid visiting a previously eaten nest for at least 5 to 8 days.

The only other food aardvarks also feed on is the aardvark cucumber. This special cucumber depends on this animal to spread its seeds. After the aardvark feasts upon one of these cucumber, the droppings of the aardvark are released near its burrow, which is the most ideal condition for this particular species of cucumber to grow in.

6. Aardvarks have strong front claws that can dig at 2 feet (0.6m) per second

Equipped with powerful front claws, aardvarks excel in digging holes in the ground. Digging at a speed of 2 feet (0.6 meter) per second, they can quickly demolish an anthill or termite’s nest make a meal out of them.

When in danger of being eaten by their predators such as lions, leopards and cheetahs, these animals can protect themselves by burrowing into the ground in ten minutes or less, making them unreachable to their predators. Their claws can also serve as a last line of defense, slashing at predators that get too close before they can finish digging holes and disappearing into the ground.

5. Aardvarks give birth to one baby at a time

Much like humans, aardvarks only give birth to one baby every time. The gestation period for an aardvark is seven months. Newborn aardvarks have wrinkles all over their bodies, and are dependent on their mother’s milk for food.

The baby aardvark only ventures out of its burrow after a fortnight. By the 16th week, they eat insects for food completely, having been weaned off its mother’s milk. It continues to stay with its mom for about half a year before moving out of its mom’s den, after it learns to dig its own holes. Baby aardvarks grow to become an adult in about a year’s time.

Aardvarks become ready to mate at about 2 years old. These creatures can live over 20 years in captivity.

4. Aardvarks are the only surviving animal in their family Orycteropodidae

Most species of animals in the family of Orycteropodidae are fossils, and the only living member of this family is the aardvark. Other animals that were in this family, like the Ptolemaiida, which was an animal about the size of a wolf, are now extinct.

The unique characteristics of this family of animals is that their teeth are not covered in enamel, the hard substance surrounding each tooth. They also do not have canines or incisors, the two sharp teeth present on most animals. The milk teeth of baby aardvarks disappear before they’re born, and the adult teeth of these animals grow throughout their lives.

Aardvarks are usually silent animals, but they do make noises occasionally. They grunt softly as they search around for food, and loudly as they tunnel back into their burrows. When scared, aardvarks make a bleating sound.

It is difficult to hear an aardvark due to their nocturnal, quiet nature.

The nasal conchae is long, narrow nose bone in the nose. Its most important functions are to humidify air as it is breathed in. This bone also acts as the first line of defense against intruders as they are breathed in. Without this special bone, we would have no sense of smell, as they are needed to keep the delicate sense of smell working properly.

The aardvark has ten such nasal conchae, more than any other mammals. Compared to other animals like dogs (five conchae) and humans (three conchae), the aardvark to have a much better sense of smell. They use this sniffer sense to seek out their favorite insect meals from very long distances.

The aardvark’s DNA did not change much from its early ancestors. From fossils of other species from its family Orycteropodidae which went extinct, scientists have found that the skeletons of the modern day aardvark had very DNA traits which are very close to those of extinct animals.

This discovery showed that aardvarks had minimal changes in terms of traits for natural selection, and that ancient versions of aardvarks likely had very similar features. The DNA of the aardvarks are also considered extremely stable in that they do not mutate easily, since they had not changed much from their ancestor animals.

Bonus. Aardvarks are regarded in African folklore favorably as being diligent and fearless

In African folklore, Aardvarks are viewed favorably as being diligent and fearless. The aardvark’s nightly relentless search for food and bravery of ignoring ant and termite bites when feeding inspired several African tribes to see it as a mascot.

Hausa tribe magicians believe that the body parts of an aardvark can be made into a charm that allows its wearer to turn invisible. Other tribes, such as Ayanda and Logo, use bracelets made of aardvark teeth as good luck charms.

Aardvarks have also been depicted in both ancient and modern media. The Egyptian God Set was believed to be an aardvark, due to the similarities of their long ears as rendered in ancient Egyptian art. Modern day depictions of the aardvark include the cartoon character Arthur Read, who was set as an aardvark.

Are you fond of aardvarks? Leave your comments below!