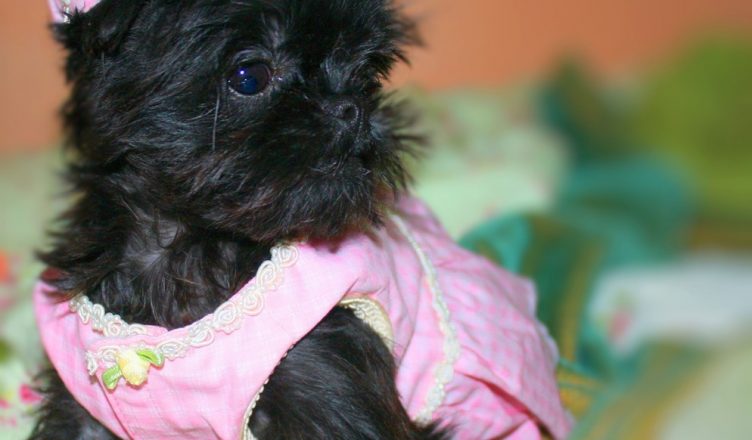 The Affenpinscher is a small companion dog that is a member of toy dog breeds. These lovable canines originate from the Pinscher breed of dogs. Read on to find out the top 10 interesting facts about this pooch!

Known as the “monkey dog” or “monkey terrier”, the ‘Affen’ in Affenpinscher means “monkey” or “ape” in German. This adorable dog breed has an unusual face that can contort into ape-like expressions, which is endearing to its owner. Affenpinscher can make hilarious monkey-like expressions that are entertaining and fun to watch, hence its name.

Hailing from Germany, this dog was already around in the 17th century. They were originally about 13 inches (33 cm), but was progressively bred to be smaller to become companion dogs. Today, the Affenpinscher stands at 9 to 12 inches (22 to 30 cm).

Traditionally a working class dog, Affenpinschers were originally bred to hunt pests such as rats and mice due to its similarity to a terrier breed. Over time, the dog became popular before World War One but its numbers dropped during the war. Afterwards, its population numbers picked back up, but dropped back down again during World War Two.

Affenpinschers are classified as having medium length hair, but they have an extremely thick coat which can appear shaggy. The fur around its head area is especially thick, resembling a mane of a young lion. The individual hair on the dog’s coat are long and thin, similar to a strand of wire. For a healthy canine, the coat looks loose and full.

If not properly groomed, this dog’s coat can become tangled and messy, and knots can form in its hair. To avoid fur problems, Affenpinschers should be regularly groomed with brushes and combs. The nails and fur of the dog should also be trimmed every few months, and the hair on its face should be brushed aside to allow the canine to see properly.

7. Most Affenpinschers are black

The most common color for an Affenpinscher is black. However, dogs with different fur color do exist. The more unusual colors of this breed includes grey, silver, red and tan. Some dogs even spot white fur on their chests.

Both the Kennel Club (KC) based in the United Kingdom and FCI based in Belgium only recognize dogs with black fur as being a pure-bred Affenpinschers, but the American Kennel Club (AKC) recognizes all grey, silver, red, tan, and even mixed colored (known as beige) canines as pure-bred.

6. Affenpinschers have a terrier-like look and personality

Affenpinschers have a unique look, and some people associate their perky ears and lively personality with that of the terrier breed. However, Affenpinschers are not as closely related to terriers compared to pinschers and schnauzers.

Due to their terrier likeness, Affenpinschers were bred as rat catchers in the past.

5. Affenpinschers are notoriously difficult to housebreak

Despite their small build, Affenpinschers can be extremely stubborn. These dogs are curious and playful, and can refuse to obey their owners’ commands from time to time. When they get into their tantrum mode, they easily slip back into their instincts of marking their territory everywhere in the house, so consistent training and reminder in the early days is required.

Having an independent mind also means that the Affenpinscher will needs to be trained from young, or they would be even harder to train as they get older. The trick to training this active canine is to give praise and consistent reward when they go to their designated spot to do business.

4. Affenpinschers have an average lifespan of 11 years

On paper, Affenpinschers have an average lifespan of 12 to 14 years. However, it’s much shorter in reality. According to a UK poll, the average age of this canine is 11.4 years old. This could be due to owners overfeeding them, resulting in health problems such as obesity and other diseases that shorten their lifespan.

Affenpinschers are also known to have health issues like hip dysplasia, and breathing problems, like all other small dog breeds. This makes them fragile, so being careful not to drop them is a must when handling these pooches.

Affenpinschers are big dogs in a small body. Mischievous, yet loyal and bold, these pooches have no problem strolling up to a larger sized mutt and challenging it to a fight if it senses that its family is in danger. Despite its small size, it is eager to stand up for and protect those it loves.

Bring curious are also a big trait of these pups. They can get very excited and run off to chase after things that perk their interest. Once their enthusiasm is perked, it is very hard to calm these pooches down.

Having monkey-like expressions also makes the Affenpinscher’s antics extra hilarious. Coupled with their natural mischievousness, the sheer entertainment their family gets from watching them do their thing is usually one of the highlights of their day.

However, this breed can also become aggressive if not socialized properly from young, as they want to protect those it deems as its own, so introducing them to other people and dogs are very important.

The coarse, wiry fur on the Affenpinscher is actually hair. Each hair grows from a hair follicle, and like human hair, the Affenpinscher’s hair can slowdown in growth after a certain length and even drop off when it’s too old.

As their fur is more hair than actual fur, Affenpinschers do not cause allergy reactions from people who are usually allergic to dogs. This makes them an excellent choice for dog lovers who are allergic to dog fur.

1. Affenpinschers are considered a rare breed

Affenpinschers are uncommon dogs. They are so rare that they rarely participate in dog shows and win awards.

It was only in 2013 that a small black Affenpinscher, Banana Joe, wins a top award at Westminster Kennel Club Dog Show. The win was significant as it was the first time an Affenpinscher had won in any major dog shows.

Affenpinschers became considerably more popular after that, but they are still hard to find outside of an inner circle of Affenpinscher breed lovers.

Bonus. Affenpinschers are the ancestor dog of both the Griffon Bruxellois and Miniature Schnauzer dog breeds

The modern pure-bred Affenpinschers were thought to be cross-bred with Griffon Bruxellois at some point, to achieve a smaller frame, shorter muzzle and more pronounced chin.

What do you think of the affenpinscher? Leave your comments below!